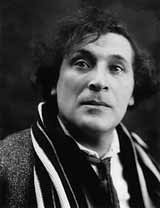 One of the best known artists in the Maeght stable, Chagall's works were often shown alongside Fiedler's in public exhibitions and in such publications as Derriere Le Miroir 121/122, Maeght Editeur (1960), which featured an original color lithograph by Chagall on cover and five more lithographs by Leger, Tal Coat, Miro, Calder and an original black and white lithograph by Fiedler.
Fiedler and Chagall's works have been featured in 10 joint exhibitions as of this date according to the Fiedler Foundation website.

© 2022 Kramer Foundation for the Arts